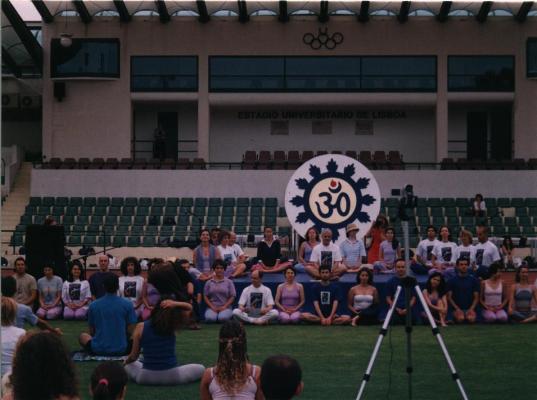 Proposal of official recognition delivered to the UNESCO / UN, for the International Day of Yoga - IDY, on the Solstice – June, 21st, by:

THIS DAY OF EVOLUTION OF THE HUMAN DNA, IS CELEBRATED ON A – SUPRA CULTURAL – COSMIC AUSPICE – A SOLSTICE – JUNE, THE 21ST –
HAS AS HIGH GOAL TO BE A DAY WITHOUT ANY BLOODSHED THROUGHOUT THE WHOLE PLANET,
FOR THE GREAT IMPORTANCE OF WHAT HUMAN BEEINGS AND NATIONS SHARE IN COMMON, FOR THE LOVE FOR LIFE,
AND FOR THE RESPECT TOWARDS THE RICHNESS OF DIVERSITY – ETHNIC AND CULTURAL, AND FOR INTER RELIGIOUS TOLERANCE

THE INTERNATIONAL DAY OF YOGA – IDY IS THE DAY OF HUMANITY’S EVOLUTION – AND OF ITS DNA, OF LIFE, OF LIGHT AND INTELLIGENCE,
AND OF SUSTAINABILITY - FOR THE IMPORTANCE OF WHAT WE ALL HAVE IN COMMONM, OF ECUMENISM, OF INTER-ETHNIC FRATERNITY,
OF INTEGRATED SELF-DEVELOPMENT AND OF SELF- RESPONSIBILITY – AND OF HUMAN / COSMIC CONNECTION

-THE FIRST DAY WITH NO BLOODSHED, FOR 24 HOURS, IN THE WHOLE PLANET-

The International Day of Yoga – IDY, projected for the first time in the World by Portugal (the Country of Fátima), by the Portuguese Yoga Confederation, the Lusa Yoga Federation, and the Yoga Sámkhya Institute / Lusa Yoga Association  - in 2001 – the beginning of the Millennium – and with the collaboration and support of the Yoga Institutions from India – Is a Day for total Human Development 1 - towards the global practice of Yoga, increasing Awareness and exponentiating the relation between Body (and hand) / Energy / Positive Emotions / Concrete, Abstract and Artistic Mind / and Beyond the Mind - "Overmind"; promoting an integral and prophylactic health, functional longevity, self -responsibility and self-demand, and the Supreme Consciousness that Transmutes and Enlightens.

It is the Day 2 – of Humanity and its DNA / One Single Race – the Human Race; 3 - of the Respect for Human Life - Ahimsá and all the Life sustained by Planet Earth; 4 – A DAY For the end of bloodshed and aggression, close to us and throughout  the whole Planet; 5 - for a Global Peace, fair and respectful for all Countries – those who really do not want war, for the promotion of a Culture of Peace, for conflict prevention, for safety, for Dialogue and Diplomacy; 6 – it is the day of Universal Love; 7 – of Human Fraternity and Solidarity; 8 – to end the barbaric dictators and the crimes held against Humanity; 9 - Day of Light; 10 – of the anti-obscurantist Wisdom associated with that Light; 11 – and of the Intelligence that must preside Life 12 - it is a Solstice – a local Cosmic Auspice between the Forces of our Star and its Planet and the Forces of the Galaxy that rules them; 13 - it is a Day for Cosmic and Galactic Awareness, and the Hyper connection with the involving Universal All.

It is the Day 14 – to highlight and appreciate the importance of what Human Groups share in common, what keeps them together, and – similarly to what happens in the inspiring Cosmos – of Preserving and promoting the value of differences and of Cultural Diversity as a great and obvious Wealth; 15 - it is the day of respect, of dignity and of Inter-Ethnic and International Equality; 16 - for reducing of social and Intercontinental inequalities; 17 - for Personal justice and justice between Nations; 18 – it is the day of tolerance and Global Religious Ecumenism; 19 - for Freedom, of those who are oppressed, against the traffic of human beings, slavery and piracy; 20 - for the Respect for the Women’s Rights; 21 - for Child protection; 22 - for the end of thirst and hunger; 23 - for Education and Research; 24 - for Art; 25 - for the Planetary Consciousness and a Fair Global Sustainability, for Ecology and for the Ecosystems safeguard; 26 – for pure air and the oxygen of the preserved, protected and recovered Forests; 27 – for pure water of the Oceans, aquifers, rivers, seas and lakes; 28 – for the respect for the animals; 29 – and for the end of corruption;

The International Day of Yoga – IDY ,  at the UNESCO / UN, 30 -  is a pioneer candidate, in the UN, to become the First Global Day of Humanity – so it be Lucid and Fraternal, for the Human Race and its DNA, and the Importance of Life, of what  we all share in common, and for the Sustainability of Diversity, on the Solstice, June 21st.